Posted in Constitutional Rights on June 17, 2019

When someone pleads guilty or is convicted of a criminal offense, the judge imposes a sentence or punishment on the person.  A sentence often includes things like payment fines and costs, completion of community service, attendance at counseling, and jail time or probation.  A sentence is a punishment that is imposed directly and immediately upon the person that was convicted.  A person that is convicted also often suffers from more indirect punishments in the future from the conviction, and those indirect punishments are called collateral consequences.  Some collateral consequences are obvious, such as the fact that a criminal record can cause a person to be fired or make it more difficult for someone to be hired in the future.  But other collateral consequences are less well known, such as the loss of a retirement pension, loss of government benefits, and loss of constitutional rights, such as the right to carry a gun or the right to vote.  Because my criminal

defense firm is in State College, Pennsylvania, meaning the heart of Central Pennsylvania, many people contact me about firearm laws and what must be done to restore gun rights.

I am frequently contacted with questions about prior records and the ability to purchase or possess a firearm.  Under Federal law, a person cannot possess a firearm if the person has been convicted of a “crime punishable by imprisonment for a term exceeding one year.” (See 18 U.S.C. § 922(g)(1)).  As with many things with the law, things do not really mean what is written.  The phrase noted above actually has a special definition.  If the conviction is a misdemeanor conviction, then the Federal firearm prohibition only applies if the maximum punishment is more than two years.  For example, in Pennsylvania, most second-degree misdemeanor offenses are punishable by a maximum sentence of two years.  Because such offenses do not allow for a maximum sentence that is more than two years, such offenses do not trigger the firearm prohibition.  However, a first-degree misdemeanor in Pennsylvania is normally punishable by up to five years in jail and thereby does normally trigger the Federal firearm prohibition.  It must be noted that aside from the Federal firearm laws that restrict gun possession, many states have similar laws that prohibit people within the state from purchasing or possessing a firearm if the person has certain prior criminal convictions.

Pardon and Restoration of Gun Rights

In order to restore a person’s right to possess a firearm, many people obtain a pardon from the governor of the state in which the person was convicted.  In many states, the pardon basically sets aside or nullifies the conviction, so the person’s is then able to purchase or possess a firearm again.  But things are not always as simple as you would think.  In the case of Pennsylvania State Police v. Sama, the Commonwealth Court of Pennsylvania reviewed a case in which a person had a prior drug delivery conviction from the state of Delaware.  As discussed above, Federal law 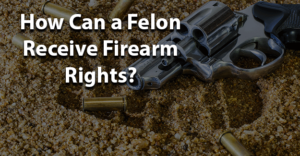 would have prohibited the man from possessing a firearm with the felony drug conviction.  However, based upon the pardon, the Federal firearm prohibition was no longer an issue because the person was no longer convicted.  The issue in the Sama case did not involve the Federal firearm laws but instead involved a Pennsylvania state law restriction.  Under 18 Pa.C.S. § 6105(c)(2), Pennsylvania law prohibits a person from possessing a firearm if the person was convicted of a drug offense that was punishable by a term of imprisonment that exceeded two years.  Despite the pardon of the Delware conviction, the Pennsylvania State Police argued that the man could not possess a firearm in Pennsylvania unless he filed a petition with the Pennsylvania court and had the court order that his gun rights were restored.  Sama argued that the Delaware pardon had removed his conviction, and, absent that conviction, his right to purchase or possess a firearm in Pennsylvania had been restored.

The Commonwealth Court agreed with the man and ruled against the Pennsylvania State Police.  The Court reviewed the definition of the word “conviction” under the Pennsylvania firearm law at 18 Pa.C.S. § 6102 and noted that the word “does not include a conviction…. for which an individual has been pardoned unless the pardon expressly provides that the individual may not possess or transport firearms.”  The interpretation of the law was pretty straight forward.  If a person received a pardon, then the person is not convicted, so the person is not prohibited from possessing or purchasing a gun in Pennsylvania.  The Commonwealth Court also noted that another portion of the Pennsylvania law stated that “a full pardon from the Governor or an overturning of a conviction shall remove any corresponding disability.”  (See 18 Pa.C.S. §6123).  Again, very straightforward and direct language stating that a pardon removes a person’s “disability” or restriction on firearm possession.  The Commonwealth Court held that the pardon of the person’s Delaware drug conviction meant that the person no longer had a “conviction” under Pennsylvania law and thereby was permitted to purchase or possess a firearm in Pennsylvania.

This case reiterates the fact that the way to restore constitutional rights that were taken because of a conviction is to seek a pardon.  While the process sounds simple, it is not.  The pardon process is often long, and a long process often means that it is expensive to hire an attorney for representation.  It is often money that is well spent.  The probability of obtaining a pardon substantially increases when an experienced pardon attorney is handling the case.  If the restoration of gun rights is important to a person, then the person should hire a good attorney to handle the case.