Posted in Constitutional Rights on February 14, 2020

I grew up in Happy Valley, attended Penn State, and currently reside in the area, so I am biased in favor of Penn State.  While I am proud of my connections to Penn State, I am disappointed in an apparent double standard that Penn State has employed when disciplining Greek organizations when allegations of misconduct are issued.  As a criminal defense attorney, I am a strong believer in equal treatment under the law.  I concede that every case and situation is slightly different, so how situations are handled may be different, but similarly situated people or organizations should be treated in a similar fashion.  In the words of Martin Luther King, Jr., 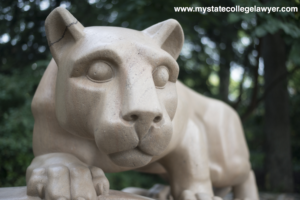 “injustice anywhere is a threat to justice everywhere.”  So, even if you don’t like fraternities, everyone should fight against injustice.

Given recent headline-making events, I believe that fraternities may be treated much differently when compared to athletic teams when allegations of misconduct are levied.  First, I understand that many people may not care about fraternities and think that all Greek organizations should be disbanded.  To those people, I would note that some members of Greek organizations have made bad decisions that have given Greek life as a whole a proverbial “black eye.”  But one rotten apple does not ruin the bunch, and an entire Greek system should not be judged by the poor decisions of a few.  Collectively, Greek life at Penn State gives back to the community, most notably through the annual THON campaign, which raises millions of dollars a year to combat childhood cancer.

In the fall of 2019 and spring of 2020, Penn State has issued immediate suspensions of three fraternities after allegations of misconduct were levied.  One incident involved the tragic death of a 17-year-old that had overdosed on nitrous oxide cartridges, commonly called whip-its”.  The overdose occurred at an off-campus residence, and some members of the Chi Phi fraternity lived at the residence.  The residence was NOT the Chi Phi chapter house and was not actually directly affiliated with the fraternity.  It was simply a house at which some brothers lived.  Penn State knew that the incident was not related to fraternity activities and issued an official statement admitting that the fraternity was not involved.  Despite clear evidence that the fraternity as an organization was not involved in the tragedy, Penn State immediately placed the fraternity on an interim suspension.  The suspension was lifted a month later, but Penn State’s immediate reaction was to suspend and then investigate.  Penn State also publicly disclosed the suspension sanction and advised that the matter would be investigated.  The fraternity was not afforded any privacy rights.  Ultimately, the Centre County District Attorney issued a statement advising that no one would be criminally charged in the incident.

In January of 2020, Penn State again immediately suspended a fraternity after receiving allegations of misconduct.  According to online news reports, a student told a friend that she had been sexually assaulted by four Alpha Epsilon Pi brothers at the fraternity house.  The friend then contacted Penn State, and Penn State immediately placed the fraternity on an interim suspension.  It must be noted that Penn State suspended the fraternity before anyone even talked to the complainant, meaning the actual victim.  The State College Police actually stated that they had not been contacted by any person or victim to discuss the matter.  I want to note that I am not trying to claim that the complainant made up the allegation.  I have no idea.  I have two daughters and would never want for them or any person to be a victim of sexual assault.  I am simply noting that Penn State imposed a sanction and suspended the fraternity before they even verified any portion of the allegation with the actual victim.  One would think that an allegation made through a third party would not be sufficient to lead to an immediate punishment.

One week prior to the suspension of the Alpha Epsilon Pi fraternity in January of 2020, Penn State football made national headlines when a former player filed a Federal lawsuit against the university, the head coach, and players.  The civil complaint alleged that the plaintiff, a former football player, had been sexually assaulted during hazing incidents perpetrated by other players.  Based upon Penn State’s handling of the fraternity matters referenced above, one would have expected that Penn State would have immediately suspended the football team based upon the heinous allegations that case directly from the complainant.  Penn State did not immediately suspend the football team while it investigated the allegations.  Penn State ultimately felt that the allegations were unsubstantiated and 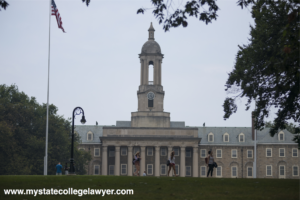 took no action against the football team or its players, and Penn State chose to not report the matter under Pennsylvania’s recently passed anti-hazing statute.  The Centre County District Attorney also decided against pursuing a criminal prosecution in the matter.

Equal Treatment Under the Law

The intent of this blog was NOT to bash the football team and argue that it should have been suspended, and the intent was not to bash the university and claim that its goal is to protect the football program.  I am actually a fan of the football team and very proud of things that the team does to give back to the community.  I don’t think that Penn State should be suspending anyone or any organization until at least a preliminary investigation is conducted to somewhat substantiate the allegations.  As a State College criminal defense lawyer, I am a strong believer in the U.S. Constitution and the notion that a person is presumed to be innocent until proven guilty.  Generally speaking, a person should not be punished until there has been a finding of some sort that the person is responsible for the conduct.

With the football team, the system appears to have worked.  Neither the team nor its players were punished after the allegations were deemed to be unfounded, so Penn State got this one right.  However, with the fraternities, Penn State appears to have gotten it wrong, at least in m opinion.  The presumption of innocence was not extended to the fraternities because they were immediately suspended.  Penn State does not appear to be treating similarly situated people or organizations in a similar manner, so Penn State is not applying their rules equally or uniformly.  As the great Martin Luther King, Jr., stated, injustice anywhere is a threat to justice everywhere.  While absolute justice is an ideal and not readily obtainable, it something that we should strive for as a society.