Grading or Severity of Theft Charges in Pennsylvania

In Pennsylvania, the grading and severity of theft offenses are primarily based upon the value of the item taken and the number of prior theft offenses in a person’s past. Pennsylvania law distinguishes between when items are taken from a store, which is retail theft, and all other types of theft.  Retail Theft charges under 18 Pa.C.S. § 3929 are treated differently from other theft offenses.    For more information about Retail Theft, click here. 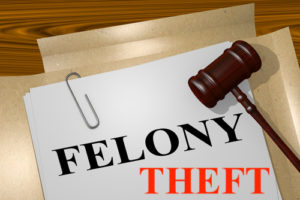 Generally speaking, the higher the value of the item stolen, the more severe the grading of the charge, and the higher the fines and period of incarceration permitted by law. Some items, such as guns and vehicles, automatically result in much more substantial penalties because they are felony offenses.  Pennsylvania theft offenses are graded as follows:

Pennsylvania theft offenses that involve a firearm are harshly punished. If a person steals a firearm or receives a stolen firearm, they can be charged with a felony of the second degree. A second-degree felony carries a maximum sentence of 10 years’ incarceration and a $25,000 fine. If a person is in the business of buying or selling property and they possess a stolen firearm, then the person is charged with a first-degree felony. A first-degree felony has a maximum sentence of 20 years in jail and a $25,000 fine.

If the property that was stolen was an automobile, airplane, motorcycle, motorboat, or other motor-propelled vehicle, then the theft is graded as a felony of the third degree. A third-degree felony has a maximum sentence of seven years’ incarceration and a $15,000 fine.

If you or a loved one has been charged with retail theft or another theft offense in State College, please call an experienced Penn State criminal defense lawyer today at (814) 954-7622, or contact us by email for a free initial consultation.