Can I get a limited license for my Pennsylvania DUI suspension?

Most people that accept ARD or are convicted of a Pennsylvania DUI face a mandatory license suspension.  People often need to be able to drive in order to work, take care of children, and attend the counseling or DUI classes that are required.  The Ignition Interlock Limited License (ILL) may be available to allow a person to drive anywhere and at any time.  In the past, “limited” licenses often limited when and where a person could drive, meaning a person could normally only drive to and from work, medical appointments, or religious activities.  Now, the “limited” portion does NOT restrict a person to driving 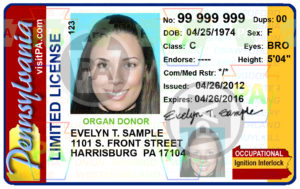 to and from work.  The “limited” portion of the IILL means that a person can only drive a vehicle that is equipped with an interlock device.  As long as the person drives an interlock-equipped vehicle, the person can drive anywhere.

The information below regarding ILL eligibility is limited to suspensions based upon DUI convictions.  If a person is already suspended or is facing additional suspensions for blood test refusals or Driving Under Suspension charges, IILL eligibility is likely to be different.  For example, a person with a first offense DUI that also refused a blood test is likely to face a total of two-years of suspension, and the person is eligible to apply for an IILL after serving six months of the suspension.