Can I have the charges dismissed because the officer did not tell me why I was being arrested and did not Mirandize me?

Officer Failed to Mirandize You 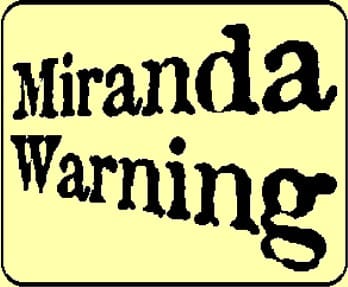 In order for Miranda to apply, a person must be: 1) in custody; and 2) being interrogated.  “Interrogated” is when a police officer quetsions a person about his or her involcement in criminal activity.  Questions like “did you consume alcohol,”, “how much did your drink,” and “when did drink” are all examples of an interrogation.  In a DUI traffic stop, the issue is “custody.”  During a traffic stop, the person is legally detained, but they are not legally in “custody,” so Miranda does not apply.  Admittedly, this distinction defies common sense, but many things with the law do not make sense.  A detention is not normally custody, so Miranda does not apply.

During a DUI investigation, the police can interroate a person without issuing Miranda warnings because the peson is not in custody.  After the person is arrested and thereby taken into custody, then the officer stops asking questions so there is no additional interrogation.  When the DUI suspect is told to submit to testing, they are read a form that basically tells the person to submit to a blood or breath test, and the person is told the he or she does NOT have the right to talk to an attorney.  After that testing is completed, then the officer often issues Miranda warnings and will question the suspect.

While Miranda warnings may not be required when the person is formally arrested, placed in the back of the police cruiser, and then transported to the hospital, there are situations in which a DUI suspect should have been Mirandized. For example, you can review a DUI case success story in which State College criminal defense attorney Jason S. Dunkle was able to have a DUI client’s admission to consuming alcohol suppressed. It is extremely important that you have an experienced DUI defense lawyer review your case thoroughly for all possible litigation issues. For a FREE CONSULTATION of your DUI case, contact Centre County criminal defense attorney Jason S. Dunkle of JD Law at (814) 689-9139 or via email.