Do I have to do field sobriety tests for a DUI stop in Pennsylvania?

Police officers routinely request that suspected drunk drivers complete Standardized Field Sobriety Tests (SFSTs), which include the One-Legged Stand, Walk-and-Turn, and Horizontal Gaze Nystagmus (eye test).  A Pennsylvania driver is NOT required to complete those field sobriety tests, and there is NO punishment for refusing testing.  The police are permitted to try and convince drivers to take the tests, including telling a driver that “if you pass, I will let you go,” or “if you are not drunk, prove it by taking the tests.”  In order to arrest a suspected drunk driver and require the driver to submit to a blood or breath test to determine the blood alcohol concentration, the officer 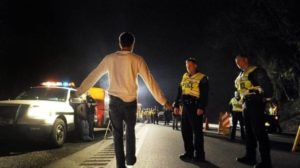 must have probable cause.  If a driver fails field sobriety testing, then the officer is more likely to have sufficient probable cause to arrest the driver for DUI.

Many states, including Pennsylvania, have Implied Consent Laws that generally require a driver to submit to a blood or breath test to determine alcohol levels IF an officer has probable cause to suspect a person was driving under the influence.  A refusal to submit to such tests can result in a suspension of Pennsylvania driving privileges, but field sobriety tests do NOT fall under Implied Consent Laws.  In Pennsylvania, when a person is required to submit to blood or breath testing, the law requires that the police inform the driver that the testing is mandatory and that failure to submit to the testing will result in a license suspension.

If a person refuses to submit to sobriety testing, it does not mean that the officer cannot arrest the driver. An officer can rely on other evidence to find that there is sufficient probable cause to arrest.  For example, if the officer observed erratic driving, such a swerving in the roadway or hitting a curb, the poor driving supports an arrest.  Or, if the driver appeared to be drunk, such as swaying while standing and slurred speech, the officer may have sufficient probable cause to arrest.

Anyone charged with a DUI offense should contact an experienced DUI attorney for a case review.  The attorneys at JD Law have represented hundreds of people charged with driving under the influence.  Contact them today at (814) 954-7622 or via email for a free consultation.