What Are Field Sobriety Tests?

According to the National Highway Traffic Safety Administration (NHTSA) website, NHTSA sponsored research that led to the development of field sobriety tests in 1975 and those tests have been used in driving under the influence investigations since 1981. In a DUI investigation, the police often administer Standardized Field Sobriety Tests (SFSTs) to develop probable cause and basically determine whether or not the driver is going to be arrested and required to submit to blood alcohol testing 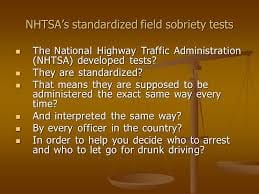 The tests consist of the Walk-and-Turn, the One Legged Stand, and the Horizontal Gaze Nystagmus (HGN). The HGN or eye test is an involuntary jerking of the eyes that occurs as the eyes move to the side, and a person that has consumed alcohol often has the twitch or nystagmus in the eye at a different angle than a non-impaired person. The walk-and-turn generally requires a person to walk a line, or an imaginary line, for nine steps out and nine steps back. The one-legged stand requires a person to hold one foot six inches off the ground and count to thirty.

An experienced DUI defense attorney knows the NHTSA field sobriety testing guidelines and is prepared to question an officer’s administration and scoring of the tests. Legal challenges could lead to the suppression of blood testing results in the pretrial phase based on an illegal arrest. If an officer failed to administer the tests or score the tests correctly, and the officer used those results as the probable cause 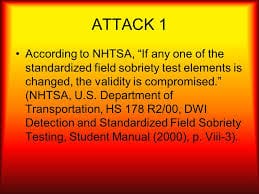 to arrest, then the basis for arrest can be challenged and suppression of the results of blood testing can be sought.

Challenges to the testing may also be raised at trial. The officer is likely to testify at a trial about the field sobriety tests and then give a legal opinion that the driver was too intoxicated to operate a vehicle safely. The criminal defense attorney can attack the officer’s opinion about the driver’s ability to drive safely by showing that the officer failed to follow NHTSA guidelines. If the officer failed to administer the tests in accordance with the rules, then the results are not scientific and thereby should not be accepted by the jury.